It is 180 miles from Luxor to Hurghada –  north to Qift, then east and into the desert to Safaga on TheRed Sea, then north again along the Red Sea to Hurghada.

I was waiting in the Venus lobby at 4:58 AM. Tired of waiting anxious to get going before the sun washed out all the contrast in my photos and before it reached 110 degrees F, I called Abdoul at 5:30; he apologized for being late and said he was on his way.  When he arrived, he said he had a flat tire this AM.  I guess airing up the tires yesterday after the oil change was not a good omen.

Belai, the nephew driver and I set out at 6:00 AM, an hour late.  Belai had driven me to The Valley of the Kings and again on the drive from Luxor up to the Dendura Temple (the mud brick factory escape story and the police escort after visiting the Temple).

North from Luxor, we drove through Nile farmland. Heavily agricultural, it had the look and dark rich fertility of the region where the Missouri River joins the Mississippi, but instead of corn and soybeans it was sugar cane, alfalfa and truck produce. Instead of tractors and combines, for the most part it was backbreaking manual field labor.  Instead of grain trucks hauling the crops to the silos it was donkey carts taking food to the local markets.

We paralleled a large irrigation canal maybe 100 feet wide that provided water to the entire region. We stopped and got the flat tire that was in the trunk repaired and then had a bite to eat for breakfast. Five half pita breads filled with a falafel, eggplant and tomatoes ($0.50) and a cup of turkish coffee.  I took pictures. Very friendly men were asking me to take their picture, so I did.  At 7:19 AM we were about 35 to 40 miles from the hotel and still in the agricultural flood plain. Lots of traffic, donkey carts, men and boys already sitting in the shade in the numerous small towns.  I often saw men with shotguns and rifles, as before in this region.  Lots of traffic – donkey carts, lots of people, many houses and buildings, shops and stores and dozens of young men sitting, standing, waiting for rides or buses.  Or just sitting and waiting….for nothing.

Went past past three checkpoints in the first 30 miles.  There are numerous police checkpoints – at every road junction, bridge, major building, temple, etc. and a very visible military presence, but it does not feel dangerous.  Their presence feels more reactive than proactive.  Cars are not searched, IDs are not checked, at least mine has not been checked even once.   Upon entering a temple with a non operational metal scanner and a non operational xray scanner, the policeman looked at me, smiled and said “You have any bombs?” smiled again and waved me through without inspecting my daysack.  Egypt must buy all the old, surplus airport security equipment that is broken to make it LOOK like there is great security.  But I have no doubt they could and would take the battle to anyone that fucked with tourists or anyone attempting a terrorist attack.    It would be hard for a terrorist to escape very far anywhere in Egypt, but they seldom escape very far very often……..anywhere……

Tourism has been hammered in Egypt, especially after the Russian airliner bombing at Sharm Al Sheikh.  Everyone, everywhere, talks about how few tourists there are and how it effects their income.

Upon arrival in Hughada I checked into the hotel that I had booked online this morning at 4:30 AM for just over $25.00.  Luckily, my driver knew exactly where it was and took me to check in.

Entering town, it had the look of a ghost town, a highly developed resort where construction came to a sudden, screeching  stop during boom times and then everyone left.

Herghada
الغردقة (Arabic) al-Ghardaqah
Al-Gouna: a compound on the suburbs of Hurghada.
Al-Gouna: a compound on the suburbs of Hurghada.
Hurghada is located in Egypt
Location in Egypt
Coordinates: 27°15′28″N 33°48′42″E
Country Egypt
Governorate Red Sea
Founded 1905
Elevation 14 m (46 ft)
Population Total 261,714
Time zone EST (UTC+2)
Area code(s) (+20) 65
Hurghada (/hərˈɡædə, -ˈɡɑː-/; Arabic: الغردقة‎ el-Ġardaqa Egyptian Arabic pronunciation: [el ɣæɾˈdæʔæ]) is a city in the Red Sea Governorate of Egypt. It is a main tourist center and the third largest Egyptian city (after Suez and Ismailia) located on the Red Sea coast.
The city was founded in the early 20th century, and until a few years ago it was a small fishing village. But since the 1980s, it has been continually enlarged by Egyptian and foreign investors to become the leading coastal resort on the Red Sea. Holiday villages and hotels provide aquatic sport facilities for sailboarders, yachtsmen, scuba divers and snorkelers. Hurghada is known for its watersports activities, nightlife and warm weather. Daily temperature hovers round 30 °C (86 °F) most of the year. Numerous Europeans spend their Christmas and New Year holidays in the city, mainly Germans, Russians and Italians. 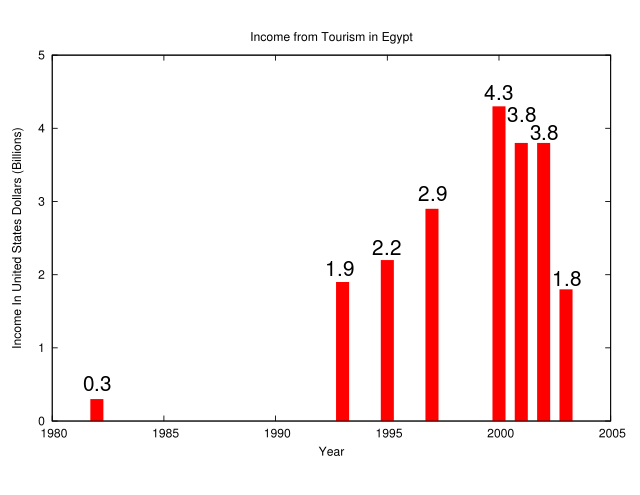 Above is the only chart on tourism revenue I could find.  Before the 2011 revolution, before the downed Russian Airliner last year.

This is a resort ghost town.  Russians flocked here.  Not any longer.  I am sure you could buy a really nice Red Sea view apartment or villa for a song and $15,000.  Probably much less.

There is unfinished new construction everywhere – big, big resort style hotels like those in Cancun, Puerto Vallarta, Cabo San Lucas, etc.  It is obvious that tourism has dropped off the cliff.  Some of it was due to the revolution in 2011 but primarily it is due to the downed Russian airliner that had taken off from Sharm el-Sheikh just across the Red Sea to the north and east on the Sanai.

Upon check in around noon or so I could not get water to come out of the faucet in the bathroom nor would the toilet flush or the showers turn on. I found the controls to turn on the bathroom water and when I did turn the water came out brown and dirty as though it has been sitting for a month and not being used.

I saw four guests in the entire hotel. There was a man sitting in the lobby working on a computer and I also saw a man out in the swimming pool. And there was a woman – German I believe  – checking out of the hotel as I was checking in.  The bar is open, the restaurant is open, but basically the entire hotel feels as though there is hardly a dozen guests here.  Maybe they are at the private beach, 300 yards to the east,  which was empty as we drove into town.

I checked into my room, rested and started writing this blog entry.

At 5 PM I went down to the bar to get a beer.  Mouhamed, tending bar, greeted me, shook my hand, smiled.  I asked him how many rooms in the hotel, which was highly rated on TripAdvisor.  He said 480.  I asked how many guests.  He said 7.

Mouhamed had a BS degree in History and was from Kom Umbo.  I ordered a beer and we talked for 30 minutes about perceptions around the world about terrorism, gun deaths in America (30,000 a year, seldom by Muslims but highly reported), perceptions of the west about Muslims, how the news covers terrorism with a bias,  how people react to terrorist acts, how it impacts the lives of everyone – not just those killed.  He was polite, well dressed, friendly, smart, educated, fluent in english.

Pic from my 5th floor room.

I am staying in the hotel on the night before the last night.  The hotel closes…… indefinitely, on Monday.

Muhamed is returning to Kom Umbo, where his father is a poor subsistence farmer.