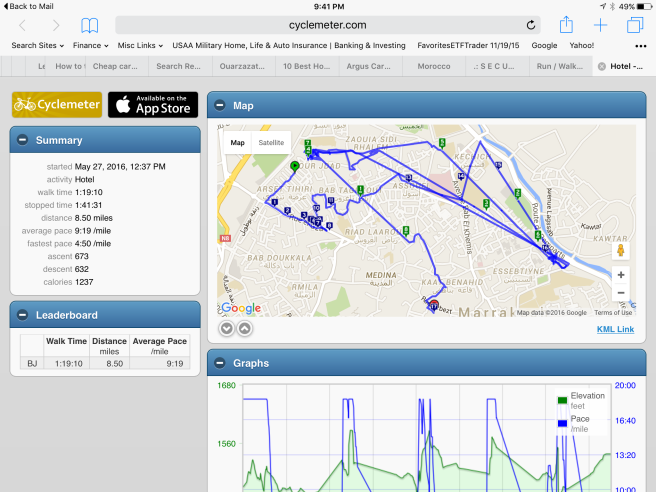 Where was walking when I met Abdoul and his motorbike yesterday before he took me to the tannery.

Then to my hotel

Then back to the tannery

I saw lots of Old Marakesch on the back of Abdoul’s motorbike yesterday, plus saw several neat places.  It was a $10.00 windfall for him and the price of a movie for me.

It was money well spent.

It was equal in price to a movie or dinner for two at Mc Do’s, and much better entertainment.

I could have spent an hour bargaining with him for $5.00 less, but would the time that it would take really be worth it?

I am ‘The Rich American’ to him.

I am leading, he is anxiously following.

(BTW, I met him while I was out walking today).

Tomorrow, at 10 AM Abdoul will hustle me off through the back streets of Marrikech (inshallah) on his motobike to a shipping office (inshallah) with my ‘to be shipped’ bag under my arm.

I needed help negotiating the shipping maze, just like in Egypt.

Hopefully, he will act on my behalf tomorrow (inshallah).

Paying him an extra $5.00 made him want more time with me.

He knows that if he does me right, I will do him right.
Then, I a plan to escape the hustle and bustle of the city for the country side.

Not on a $100.00/ day group tour with a bunch of Moraccan touristas or on a slow, overcrowded bus.

I’m feeling like I need some mountain air to clear the tannery smell from my brain.