Michelle picked me up at 8:30 and we immediately left for a light breakfast and an espresso. The town of Fes – and the entire Arab world for that matter – was starting to prepare for the first day of Ramadan. Shops were closing, people were shopping for food and women were busy preparing special treats and meals – just like the Wednesday before Thanksgiving in the U.S., the day before is not a normal day.

Today, we were on a mission.

We were met at the medina wall by Aziz, Michelle’s ‘man on the ground’ in Fes. Walked through the twisty medina and soon entered the carpet shop for the second day.  We were immediately welcomed by the english speaking Moroccan salesman and were offered mint tea. We took off our shoes. The shop was closed to everyone but us.   The state licensed shop sold only the finest carpets in Morocco.  Every carpet comes with a government certificate of authenticity, which is very important.

Yesterday was the last day of the pre-Ramadan sale, where the carpets were reduced in price up to 70%. It is a mixed metaphor, but it was equlivent to an end of the season clearance sale and we had front row seats.  A normally $20,000 carpet would be sold for $6,000 and the proceeds would be used for feeding and caring for the city’s widows and the handicapped during Ramadan. There is no government social welfare system like Social Security in Morocco so the sales made by these government sponsored stores are a key social support system. There was a special accommodation made to be open for us today.  They make up for the low sale prices before Ramadan the rest of the year.

There were about 6 different types or styles of high quality carpets in the store, but there were also some of the ‘tourist grade’ carpets that are frequently sold in the souks in the medina.  The tourist grade carpets were 1/10 the price.

Michelle was looking for only two or three types of carpets.  Mint tea was served and the show began. At times we asked that carpets be removed from the walls and workers brought out ladders, removed the selected carpets from the walls and spread them on the floor. Others were unrolled and still others were unfolded, depending the type of carpet. Once the floor – about 40 feet by 30 feet square was full of carpets, we would either say yea or ney to each one. We usually had similar tastes and favorites. The yeas went into a pile on the side of the room for final approval and the neys were folded or rolled and removed. Then more were presented.

We looked at only one type of carpet at a time.

Michelle has done this before and knows what to look for, what types, styles, sizes and colors fetch the highest values at auction houses in the U.S. and Switzerland.  He knows the when, where, what, why and how of the carpets.   The workers continued to present to us the carpets. Soon the floor was filled. Sometimes we would ask the workers to roll or refold the carpet up as soon as it was presented – ney.  Others stayed on the floor or went into the yea pile for the next round of selection. This went on for several hours and we looked at over 150 carpets – large, medium and small, silk, wool, bright, muted, traditional and modern, ones that were primarily red, yellow, green, salmon or blue. All were unbelievably beautiful, just like the palace.

We walked on them with our bare feet and for the silk carpets we asked for them to be turned so that they could be seen from the light or the dark end, as there is a distinct viewing difference. Some carpets were double sided, made with two women passing the needles back and forth to make the carpets. Others, like the silk carpets were hand knotted and had 2.5 million knots and took over five years to make.

They all are made with natural dyes, will not fade or run when washed.   You can spill red wine on them and it can be cleaned off with salt.

I took some pics and we were brought more mint tea. The salesman asked to be excused to go and pray so we walked on the carpets and talked about which ones we liked the most or which ones we did not like as much. Which ones were too similar, even though each one was/is unique.  I liked many of them, but certain ones were especially beautiful.

Finally, the time came for the final decisions.  The piles of the yeas were unfolded or rolled out and one last yea or ney selection was made.

Further details about final selections or purchases are a private matter, but let me say that they were all stunning, unbelievably beautiful pieces of art and the salesman said he was cleaned out of the best carpets in the store. 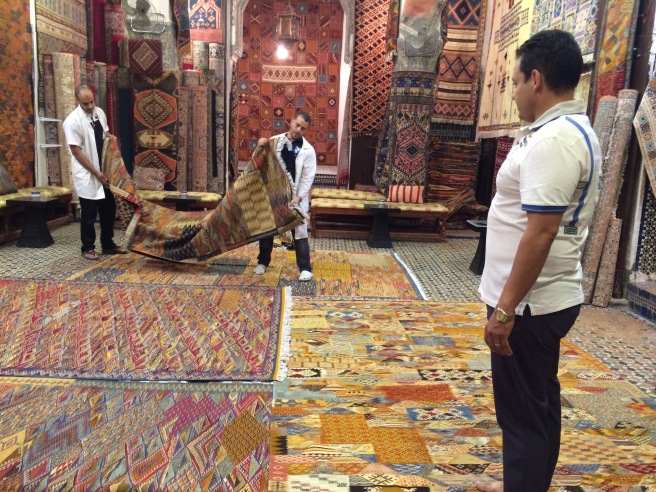 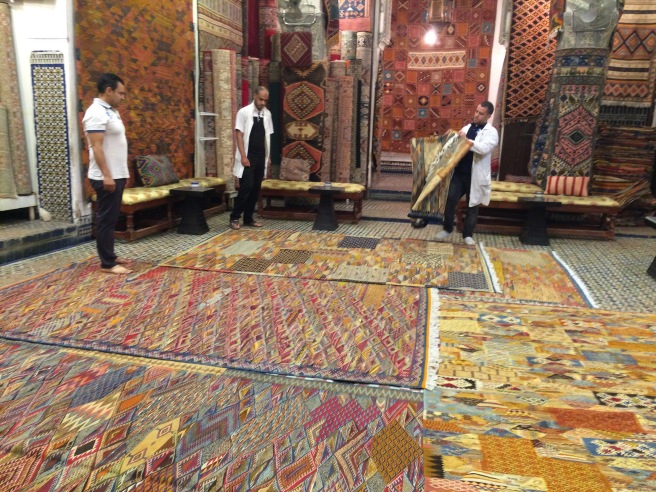 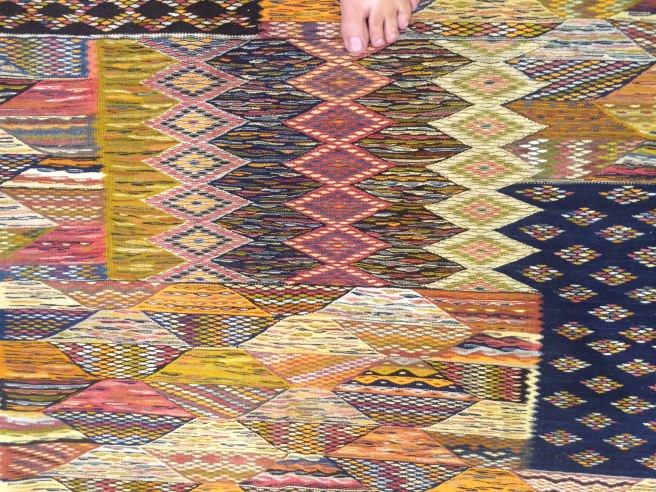 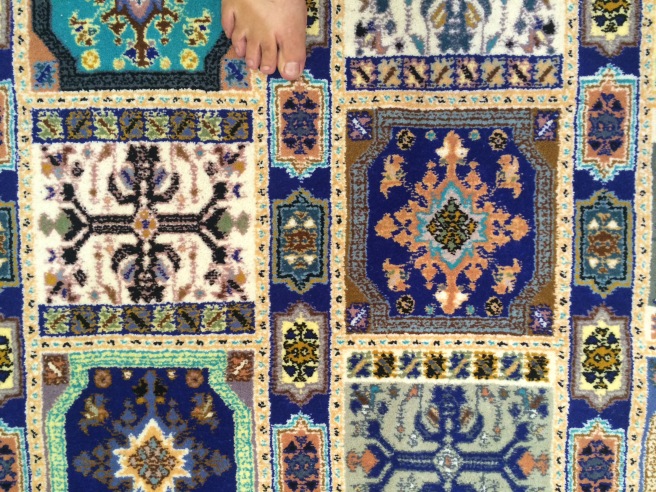 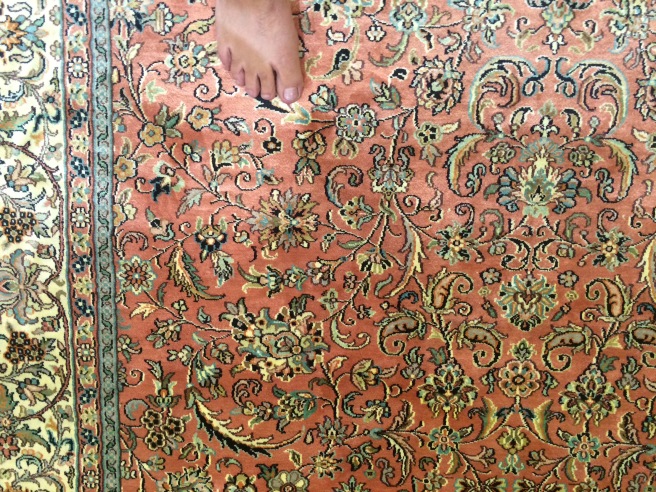 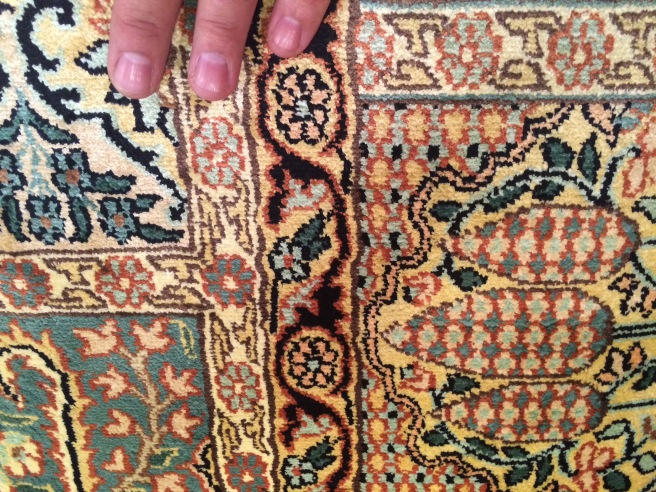 One thought on “Rugs, Rugs, Rugs”