Yesterday, May 9,  2016, an hour and a half after the ship’s posted arrival time, midday at the midpoint of the cruise between Luxor and Aswan, we tied up at Edfu, on the West Bank. A short distance away is the Temple of Horus and I feel a little guilty for not disembarking and bargaining for a caleche for a short visit, as my guidebook says it is one of the best preserved ancient sites in Egypt.  I will visit on the downstream cruise in several days.

The boatload of tourists disembarked. I had a beer, took a shower and hit the top deck for a dip. It was midday, hot, and I had the upper deck to myself. I relaxed in the solitude of the 2.5 meter by 5 meter pool. By the time I had enough time in the pool, the tourists started returning to the boat. Alone on the top deck I watched over the starboard railing as caleche after caleche (horse carriage) dropped off tourists and they ran the gauntlet of touts that were selling water, tour books about Horus, cigarettes, etc. I watched and knew I had made the correct decision. When the boat stops on the ride back north in several days, I will give Temple of Horus a go, but without a guide.

I watched as a young tout, a girl about 9 years old, unkept and wearing long soiled blue dress, tried to get the attention of the stream of returning tourists. 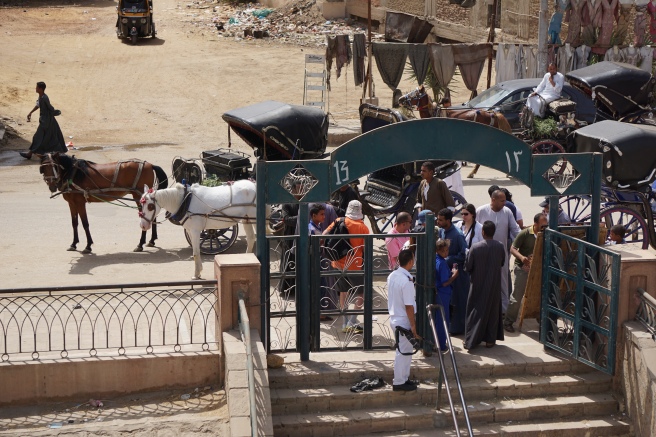 Look closely and you can see the girl in the blue dress.

Focusing on her hand gestures, a rapid tapping of her mouth and ears, I suddenly realized she was deaf and mute. I thought about her future. This probably WAS her future – begging shoreside every time a cruise boat tied up and the tourists poured out for the one hour visit to the Temple of Horus and then returned to five star luxury for a buffet dinner.

A european couple from the cruise ship were returning from the temple tour and both politely refused her pleas to buy whatever it was she was selling – it looked like small purse sized packs of kleenex, an item I witnessed repeatedly being hawked on the train from Cairo (think TP). The couple came aboard and must have gone straight to their stateroom, for soon the man reappeared and disembarked down the gangplank.  He handed the girl a small black plastic bag.  She gestured for money……money for food….. by rubbing her fingers together and then repeatedly touching her mouth. I see the gestures frequently, often made by children or old women. The man refused her pleas and returned up the gangway. I watched as she opened the plastic bag fumbled with several pencils and then thumbed through a small paper book – it could have been a small coloring book or a blank note pad.

She ran up the riverbank steps, past the line of caleches and across the street. As she was running towards some buildings and past several men, a pencil dropped from the black bag. She darted for the pencil and then I watched, aghast, as a man in his 40’s pushed the little girl rudely aside with his forearm, snatched the pencil and quickly placed it in his gallibaya pocket. She did not protest; how could she?  Accepting her loss, she turned and ran away quickly, clutching the black bag to her chest.

Note: text revised 5/11/16, correcting several errors, now that I have access to inet.

Note: (originally written before I got the fast inet):

In this environment with little or no inet, it is extremely difficult to write the way I like, with historical info that is a copy/cut/paste from the web, researching additional supporting info, history, etc.  Also, being unable to upload pics greatly diminishes, in my opinion, my posts compared to earlier travel posts on fishbike53walkabout.blogspot.com.

I cannot even get my iPhone to download data via the cellular network. I believe, but have been unable to confirm, that it is related to my SIM card. I think I need to buy additional data download packet, but have been unable to find anyone that speaks technical english. I cannot connect to any browsers or access mapping capabilities with my phone and even if I could, the connection, I believe, would break constantly. Only once in two weeks have I seen a download speed >2 mbps and that was for 30 seconds at 2.2 mbps. Normal download speeds, using the speedtest app has been in the range of < 0.03 mbps. It is similar to attempting to fill a bathtub with a faucet that only drips!!!

2 thoughts on “For A Pencil”